[One of a series of posts from past issues of The Tool Chest.]

In conversation with another member recently it became apparent that we were not really clear as to what we included under the name "hand tool". Clearly, as the Hand Tool Preservation Association we should know. I would therefore like to offer the following definition and invite other members to comment:

"A hand tool is any device which increases the user's capacity to do work without drawing energy from any external force."

Would we also include lathes of the "great wheel" type for which two operators are required, one turning the great wheel which powers the lathe whilst the skilled operator does the actual turning?

Would we also include a machine which was driven by one or more operators walking or climbing inside a wheel which powered a driveshaft? (Not that we see these often!) 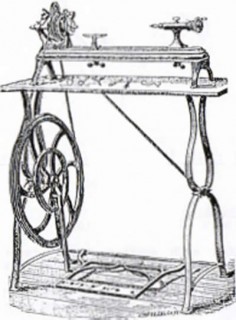 No comments made yet. Be the first to submit a comment

By accepting you will be accessing a service provided by a third-party external to https://www.htpaa.org.au/